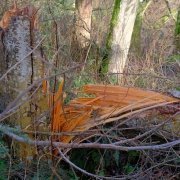 The December 20, 2018 windstorm, described by BC Hydro as the worst storm in decades, caused minimal damage to the tree collection at Darts Hill Garden Park. The natural forest north of Bed 7 did not fare quite so well. Several large Alnus rubra, red alder, growing next to the Native Loop Trail failed catastrophically, one shattering at its base. Another trunk along the path failed at about 10 meters above the ground.  Additional damage can be seen in the surrounding forest. The big Paulownia tree in Bed 7e, overturned at its roots, collapsing north, its trunks and branches completely covering the Native Loop Trail. Two smaller trees, a Corylus and Amelanchier, adjacent to the Paulownia, also blew over blocking the loop trail. The Trail was quickly coned off by Parks staff. Clearing and debris removal had not occurred as of January 5, but will be attended to soon. Luckily the trees in the Heritage garden fared much better, their fallen branches littering the paths. The December 20 storm was a sober reminder of Mother Nature’s fickle power.